Who are these guys living with my son? Winaukee’s process to find the core of what makes us tick

It’s a scary thought for a parent to send their child away for the summer to live with someone they may not have even met before…but it also might be one of the most rewarding experiences a child can have. It gives them an opportunity to expand their lens through which they view the world: to learn in both sport and life from someone they look up to and respect. And hopefully, also create a friendship and bond that will last forever.

That being said, our counselors need to be capable of being that role model and providing the opportunity for that connection and growth to happen. Assuring that we find the right people to join and build our community starts with Winaukee identifying who we are as a camp and what we are striving to be. Understanding your identity and establishing a culture is the foundation of any great business or team that sustains success and with longevity, and identity and culture are built on core values.

We’ve put a lot of thought and meaningful conversation into understanding and becoming clear on what our core values are: a labor of our full time team, our tenured seasonal leadership team, and 6 years of time together. At the core and in the simplest terms, as Dan puts it, “Winaukee’s purpose is to create happiness”, but deeper into that, there are a multitude of layers that go into creating that happiness and how we do it. In the end, this progression led us to settle on these four core values: Community, Safety, Growth, and Fun. So in the context of staffing, for me, finding candidates that exhibit these core values is priority number one.

There’s a 2nd piece of the staffing puzzle here – the skills and competencies of our counselors. We’re a sports camp; sports are the core of our programming offering. It’s paramount that we offer high quality athletic coaching. Keep in mind that the vast majority our sports counselors must also serve as counselors and live in the bunk, and thus, are younger and still playing competitively themselves (whether as a collegiate athlete or beyond). So although a candidate may have several years playing in their respective sport, their coaching experience is often limited…and playing and coaching are two different skill sets.

Yes, high level success as a player often correlates to an advanced knowledge of the game, but effective coaching requires other abilities such as organization, recognition, creativity, energy, and communication. For camp, a counselors’ playing experience in the sport does go a long way, but it must be developed beyond just knowing some good drills and techniques. Our approach is to have a barometer for playing experience in which likely returns a baseline level of coaching ability and knowledge (typically collegiate level or above) and then supplement that experience with instruction and support from our Athletic Directors and leadership team to fill any coaching skill gaps they may be short on.

Where do our candidates come from?

Our counselors come through all different funnels: referrals from other staff members, referrals from camp families, applications through the website, connections and partnerships with universities, an array of online recruitment sources, social media, staffing agencies, and of course occasionally it’s simply random fate through some obscure channel. Our favorite leads are those that stem from our own Winaukee network. If a referral comes from someone that already knows what Winaukee is all about and has that love for our camp, then there’s a good chance that the referrer knows that candidate would be a great addition. There’s also a good chance that person has already been painted a firsthand picture of what life is like at Winaukee and they can’t wait to be a part of it.

Regardless of how a candidate comes into the picture, the process remains consistent. The first contact is a touch-base phone call to talk a little more about camp, fill in any gaps or answer any questions the candidate may have about the position, and learn a bit more about their interests and what they are looking for. If things feel like a potentially good fit at the end of the call we setup a time to have a video interview call.

In the initial video call, the goal is to really get a full sense of the candidate: their personality, their motivations to come to camp, their background, their experience working with youth, and their experience in their sport/activity.
At the end of the first video call, if the candidate proves to be an optimistic fit at Winaukee, we will schedule a 2nd video interview. In the second interview the goal is to confirm the candidate will be a fantastic addition to the Winaukee community and to begin to develop the relationship between Winaukee and the candidate. At the end of the process an ideal result is that we have found someone who is not only qualified to fulfill the responsibilities of the role but who also aligns with our 4 core values and will be a great addition to our Winaukee family!

It’s very important though that this is also a position that fits them. As much as we want it to be a fit for Winaukee, it needs to be a position they are excited about and will thrive in!

As mentioned, one of our organizational core values is ‘Safety’. In our goal to have the best qualified counselors the safety of our community is paramount. We have a robust formal application process that includes checking professional references and several background checks. A successful candidate must pass all these checks in order to step foot on Winaukee property!

The foundation of our process can be summed up as: find good people that align with our values! 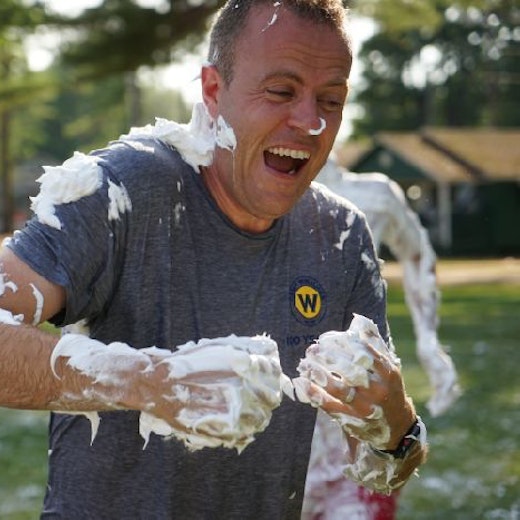 I wouldn’t be who I am today if not for all the experiences I’ve had along the way. I believe experiences are how you become who you want to be.